When I spoke to Stewart we talked about the back of my panels – or at least those parts seen when looking down the sides of them. We talked about the need for me to paint and ‘finish’ them – as the audience will want to see what is there.

We had a lengthy chat about what colour this should be: white, black or grey (and what shade of that).

We agreed I had to test this out. I had a limited number of panels I could do this with and was keen to test them with the same panel otherwise I could be fooled by the differences on the panels rather than by the shadows.

I decided white would probably negate the need for a ‘floating’ panel at all as it would make the shadow much paler and the panel may appear as if it was placed on the wall rather than hanging in front of it. I also decided that black might make too much of a shadow and create a grey that might influence the colours in ways I didn’t want. So I decided to test out a couple of greys – a mid- and dark-grey.

Frankly, I don’t know why I was so concerned about testing it. Because I want to have the panels spotlit I tested them in my kitchen where I have spotlight downlighters. The shadows differed in density and colour according to the distance from the light and when I managed to get it exactly central with even lighting, the background colour had no influence on the shadow colour. See below. 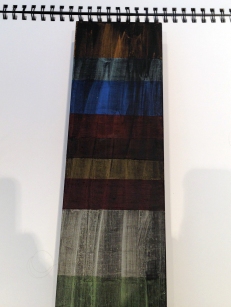 If it were to have an effect, I would prefer it to have a warmer and darker feel than a lighter, cooler one. So I am opting for a B&Q colour called Asphalt. I tested it in matt – but I can’t stand to touch it when the rest is all nice and smooth – so I will look to find it (or something very similar) in silk/satin.

Once all the panels are mounted, I will be painting them with this on the reverse.

The latter ones have good side edges, but the earlier panels have satisfactory fronts and not great edges. On these earlier panels, I may paint the edges grey too. I will have to consider this.