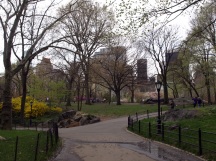 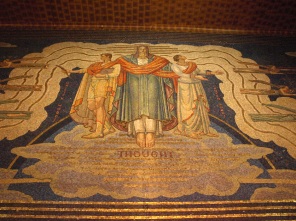 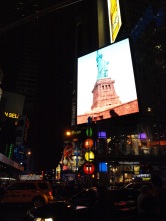 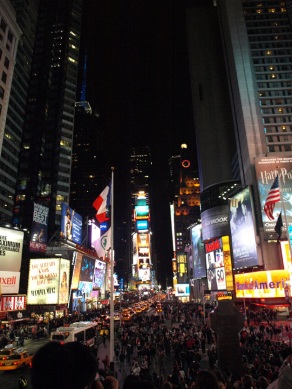 Today was Good Friday – and it was!

Slept well and got up fairly early and went across the road to the deli and bought a take out Panini and coffee and went in search of Central Park to eat it. Unfortunately we didn’t bother looking too much at the map and just wandered uptown – but discovered we had overshot it when we got to the Opera. Cut across and finally got into the park. What a heavenly place it is. Surprising and vast. Initially the benches were scarce, but we found a great place to sit and watch the park go by. A nice little suntrap. The patterns in the trees were fantastic. Twisting and turning shapes and negative spaces. Couldn’t get enough of them – but not sure that they come across well in photos. Also surprising that the landscape in the park is quite undulating and rocky. With patches of granite that poke up through the grass in places. It was great to see parts of the park I had seen in movies (like the bridge where they have the snowball fight in Elf). Surprising little gardens within the park too. So we walked through onto 5th to walk down to MoMA.

Now, I’m not going to write about any art in these entries. I will look at the art in a separate entry where I can reflect on them. These ‘Day’ entries will be solely about the day’s adventures.

Wandering down Fifth, you stumble across store after store of iconic places – like Tiffany. So ‘After Breakfast, Tiffany’s’ we struggled, but eventually found MoMA. It appeared to front 5th, but turns out it is behind a church we kept walking past! Pesky map!

MoMA is HUGE. Another one of those classics where you have to choose what you want to look at rather than see it all. The thing on our tick list was to see the Abs Ex exhibition. So we headed up there first. This in itself was a whole museum-worth. So many iconic artists – and many pieces by each. I was really good to see how each movement and artist progressed. You could see how the style changed for both and how art moved forward. It also really helped to see how people like Mondrian and Rothko worked up to their abstract pieces – how their work developed in stages to get to the point that we all know them for.

We also went into the Impressionism section – where I saw many famous pictures – such as Starry Night and a large Waterlillies picture, some Seurats and the melting clock Dali picture (which was TINY – about A5 – I had always imagined this was huge, so I was really surprised). By now (it was nearing 4) we were really flagging to tried (again) to eat in a cafe in the museum but it was so busy we would have waited an hour for a seat. We had a brief look in Contemporary and decided we would go out for a breather and come back in to do that section.

On leaving we found out that it was Entry by Donation evening – and there was a queue round the block to enter the museum. So re-entry was looking unlikely. We had a good rummage in the 2 shops and went to the Folk Art Museum next door. This was a nice manageable sized museum and the cafe was empty enough to accommodate us. So we had a nice (and vegetarian!) meal in there and a mooch around the museum. The waiter in the cafe was hilarious and really friendly (as all New Yorkers were) and we chatted to him for a long time about what was good to do and see – he mostly recommended downtown deli’s or Drag Shows – we made it to neither. It was also their donation evening (though we had already paid) so they had like folk music in there.Some was good – other bits were like someone letting out a balloon!

There was an excellent quilt exhibition. These were political pieces, and community pieces and were really thought-provoking and beautiful as well as of historical interest. We really liked this museum and I’ll talk about and show the work we saw in later posts. Whilst in here I accidentally changed the ISO setting of my camera (which I had been searching for) – so all subsequent low light images were much better, but the earlier ones in MoMA suffered somewhat.

We walked back to Times Sq (via a few more purchases) to see it all lit up at night. Still crazy. Like swimming underwater. Take a deep breath and hold on and try to get to the side. Once you’re at the top of the viewing platform you’re home and dry for a while and can breathe before you have to put your head under again…

We walked back to the hotel (via the deli and liquor store) to drink wine and listen to the whoop-whoop mating calls of the NYPD cars. Not sure why they don’t use the full siren – guess it is because it is after a certain time, but their ‘mating call’ became a feature of our trip, along with our sponsors (this time it was Caffeine-free Diet Coke – and often accompanied by ‘a nice sit-down’). Nairns oatcakes seem to be reserved for Scottish trips – though we did bring some…