I’ve been reading Touched with Fire by Kay Redfield Jamison and in the early chapters, she talks about historical figures whose behaviour has lead her (and others) to believe they were suffering from bi-polar or mono- depression. She includes many quotes from other writers and creatives – which are very eloquent and descriptive and I found both artistically inspirational and humorous where intended.

I picked out some of the quotes that spoke to me in terms of making work. I have listed these below, with images in the slideshow of experimental pieces I made from those. I have been reading this on my Kindle, so am using Locations instead of page numbers for references.

Hugo Wolf: “I appear at times merry and in good heart, talk, too, God knows how well within my skin; yet the soul maintains its deathly sleep and the heart bleeds from a thousand wounds.” Location 382

“Excessive preoccupation with sin and religion are not uncommon in depression; likewise, thoughts of suicide often accompany feelings of despair and apathy.” Location 401

“Sure enough, the old symptoms began to reappear. His sleep was troubled by dreams, his waking hours by accusing voices… His shaken nerves could muster up no power of resistance. Every day he grew rapidly worse. Melancholy swelled to obsession, obsession to delusion… For the third time in his life Cowper was a raving maniac…” Location 405

“I stay because I am too weak to go. I crawl on because it is easier than to stop. I put my face to the window. There is nothing out there but the blackness and the sound of rain. Neither when I shut my eyes can I see anything. I am alone… There is nothing else in my world but my dead heart and brain within me and the rain without.” Location 425 [Poet: Edward Thomas]

‘My nervous and hypochondriacal [melancholic] feelings almost verged upon insanity. I seemed to myself to be shut up in a cavern with serpents and scorpians and all hideous and monstrous things, which writhed and hissed around me and discharged their slime and venom over my person…” Location 429 [Poet: James Clarence Mangan]

Sylvia Plath “I saw the days of the year stretching ahead like a series of bright, white boxes, and separating one box from another was sleep, like a black shade. Only for me, the long perspective of shades that set off one box from the next had suddenly snapped up, and I could see day after day glaring ahead of me like a white, broad, infinitely desolate adventure.” Location 487

Benjamin Haydon “I have been like a man with air balloons under his armpits and ether in his soul.” Location 511

John Ruskin “I roll on like a ball, with this exception, that contrary to the usual laws of motion I have no friction to contend with in my mind, and of course have some difficulty in stopping myself when there is nothing else to stop me… I am almost sick and giddy with the quantity of things in my head – trains of thought beginning and branching to infinity, crossing each other, and all tempting and wanting to be worked out.” Location 534

“In a recent novel by Jonathan Carroll: There was no screech of tires, screams or thunderous crash when my mind went flying over the cliff into madness, as I gather is true in many cases. Besides, we’ve all seen too many bad movies where characters scratch their faces or make hyena sounds to indicate they’ve gone nuts. Not me. One minute I was famous, successful, self-assured Harry Radcliffe in the trick store, looking for inspiration in a favourite spot. The next, I was quietly but very seriously mad, walking out of that shop with two hundred and fifty yellow pencil sharpeners. I don’t know how other people go insane, but my way was at least novel.” Location 576

“In a letter to his friend and fellow poet Thomas Moore, Byron wrote ‘I should, many a good day, have blown my brains out, but for the recollection that it would have given pleasure to my mother-in-law; and, even then, if I could have been certain to haunt her – but I won’t dwell upon these trifling family matters.'” Location 812

“Poet and critic A. Alvarez in his book The Savage God… he drew on the contrast between the normal and the depressed worlds, portraying an abyss that cannot be spanned: A suicidal depression is a kind of spiritual winter, frozen, sterile, unmoving. The richer, softer and more delectable nature becomes, the deeper that internal winter seems, and the wider and more intolerable the abyss which separates the inner world from the outer. Thus suicide becomes a natural reaction to an unnatural condition.” Location 856

Lord Byron
“Yet must I think less wildly: – I have thought
Too long and darkly, till my brain became,
In its own eddy boiling and o’erwrought,
A whirling gulf of phantasy and flame:
And thus, untaught in youth my heart to tame,
My springs of life were poison’d”
Location 952

I used this research as a starting point for some work on depression and poor mental health – using my own experiences as an insight to those I have been fortunate enough not to encounter. Some pieces I used to create work which had direct quotes from the above writers. I chose to produce textile work, with machine embroidered text as there is something demented about the frenetic stitches caused by the machine when it is slightly out of control that add to the desired feeling in a way that you just can’t do with paper and pen. Loose threads that are unpredictable and can move and change shape are perfect at conveying the uncertainty of trusting your own mind.

I played around with painting some of the flat pieces before or after stitching and tried using some pieces with a quilted effect. I like the idea that those pieces look cosy and comforting and that the text looks like the free stitching to keep the wadding in place. But in reality the text subverts the piece into something very dark that exists by giving the impression that all is cosy and well.

This piece is inspired by this quote: Benjamin Haydon “I have been like a man with air balloons under his armpits and ether in his soul.” 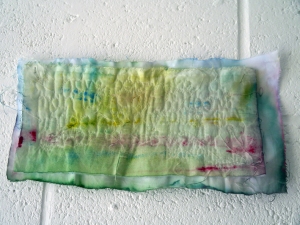 The text is very hard to see and generally the acrylic just looks a mess. I actually prefer the reverse where the colour has soaked through. Not entirely convinced this works at all.

This lead to me making this piece which is the above quote by Byron. “I should, many a good day, have blown my brains out, but for the recollection that it would have given pleasure to my mother-in-law; and, even then, if I could have been certain to haunt her – but I won’t dwell upon these trifling family matters.” 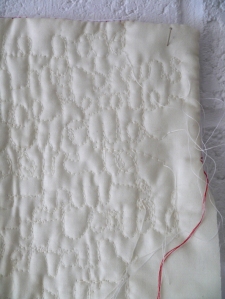 I like this piece much more. It speaks to me of domesticity. There is something about it that points me towards post-natal depression. Maybe it is because of the scale, that I could easily see this as a baby blanket or quilt. The unfinished/part-finished quality of the edges and the red thread speaks of an interruption, of despair as well as being cosy and caring. I would consider making this sort of thing on a larger scale. Perhaps as a whole or a patched version.

This then pushed me to look at another of Byron’s quotes:
“Yet must I think less wildly: – I have thought
Too long and darkly, till my brain became,
In its own eddy boiling and o’erwrought,
A whirling gulf of phantasy and flame:
And thus, untaught in youth my heart to tame,
My springs of life were poison’d”

I painted on some felt and stitched the inscription as drips from the top of the fabric. 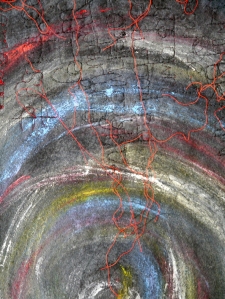 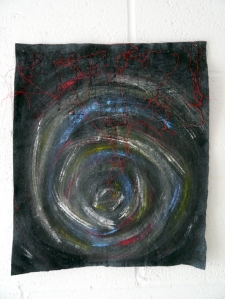 I am more interested in these. More intrigued by the way the lower thread pulls through on the stitching and how the threads hang. But, again, I find the reverse much more interesting. The words are there, but hard to read as they are reversed – so it is language, but not so. Rather like Susan Hiller’s inscription Self Portrait (1983) [P100 of The Art of Reflection, Meskimmon, Marsha – Scarlett Press, London 1996]. This then becomes more about colour, composition and emotion than it does about what the words actually say.

From here I was inspired to move to painting canvases to produce some personal slants on the Edward Thomas quote above: “I stay because I am too weak to go. I crawl on because it is easier than to stop. I put my face to the window. There is nothing out there but the blackness and the sound of rain. Neither when I shut my eyes can I see anything. I am alone… There is nothing else in my world but my dead heart and brain within me and the rain without.”

From here I bought a paper from that day – for no other reason than to create a dripping feeling with words. I began by pasting sections of that days “i” newspaper to the canvas. As I progressed, each piece related to me in some way: what I was doing or going to do; background worries or concerns; perceptions of my own body image etc.

I then began painting on top of this – washing black all over the surface to kill the white but trying to avoid obscuring the stories.

I roughly sketched a silhouette of my own head out in the sunshine and filled it in with a wash. But not ‘solidifying’ the head leaves it open to far more interpretation and does not identify it as anyone in particular. I added washed out coloured drips and eventually the window frame – which takes on some semblance of a cross (harking back to the sometimes felt religious obsessions by those with poor mental health). To reinforce the religious context though, the proportions of the painting and/or cross should be different to accentuate the meaning. 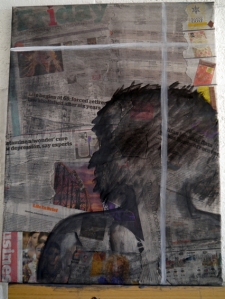 From here I tried a painting about my own struggles. I placed myself out in the landscape, with a moody sky that appeared to be preparing to eat me. I am forcing myself into the rain and pushing forward, trailing colour behind me as it drains out through the effort to struggle on. However, the clouds wind up looking quite comical and a piece of foreboding it doesn’t really work.

Although there may not be anything here I would choose to take forward at the moment, these pieces were important to work through in order to explore them and get to where I am now. Sometimes it is important to walk down a path to a dead end in order to finder a longer, wider road.