Yesterday I went to Nottingham to experience the ‘EXXOPOLIS’ Luminarium created by the Architects of Air which is part of Neat14.

It was an interesting and surprising experience. The day was pretty dreary and the outside of the structure looks bonkers – like a pvc jester’s hat gone wrong. I had seen photographs of the structure from friends’ previous visits and from the promo sites – but I just couldn’t see how these correlated with the structure I could see before me. The outside did look like a bouncy castle!

You enter the structure via an airlock and the first chamber has a small red window and a guide who provides advice on getting the most from your visit and a physical map (as it is a real rabbit warren inside). This chamber did not look promising. It was pretty dark and not at all like the promo images I had seen. I figured this was due to the awful weather and resigned myself to the idea this would not be as good as I had hoped. I WAS WRONG. It was amazing once we were properly inside the structure. On exit the guide told us that the luminarium just needs light to work – it doesn’t matter about the quality of the light, although it does provide different effects – but works from sunrise to sunset, no matter what.

There are chambers with dominant overall colours – which did have surprising effects on the children. Maybe it was because the red chamber was the first, but the kids were utterly bonkers in there. They were running all over the shop, fighting, jumping and yelling. The story was very different in the blue and green areas. In the blue one everyone was very chilled.

It was also interesting that the colour perception of cameras were quite different to those of the eye. We could compare our digital images with what we could see there and then – and the spectrum of colours was much wider and deeper in the camera than viewed by the eye. The red colours push, or split into yellow in the digital images, but they appeared red to the eye.

Beautiful environment where the colour combinations change with every step and turn.

The solidly coloured chambers were very reminiscent of Carlos Cruz-Diez’s work Chromosaturation. Except his rooms lack shadows (in general) which means your eyes really, really hurt when you move from one lit area to another as there is a distinct lack in variant colour tone. In these chambers your eye does get used to the colours and it begins to dull. The red room turned to orange instead of vibrant red quite quickly. As you moved to another area however, the shadows in the structure allow your eyes to adjust really quickly and your eyes don’t hurt or have any problems at all.

I’d go again (as long as I had my camera too) in a heartbeat! 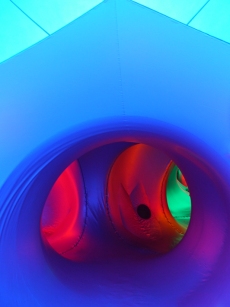 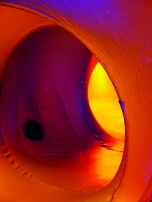 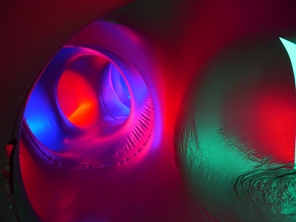 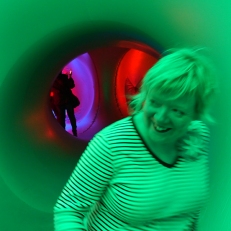 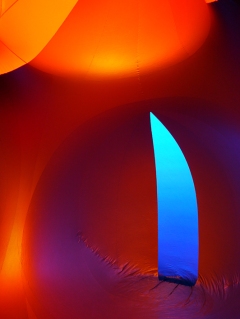 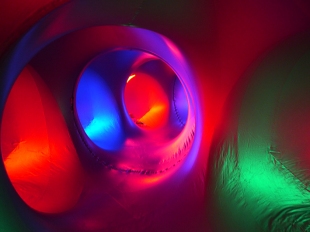 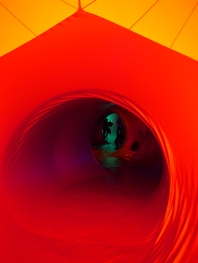 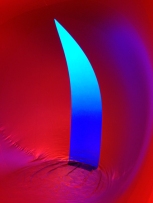 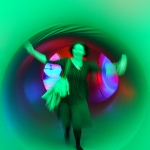