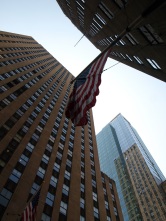 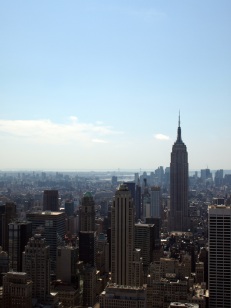 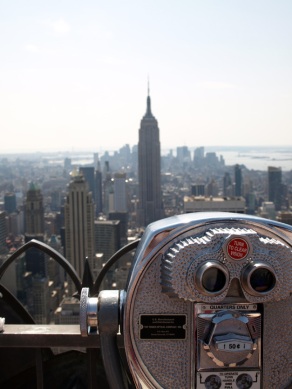 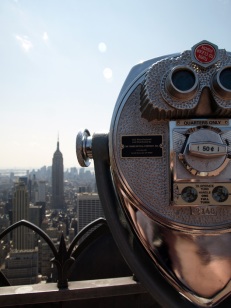 Got up really early – but we were both so tired we didn’t go out for quite a while. The weather forecast meant it was due to brighten up, so we decided to take a chance and go to the Rockefeller Centre. We opted for the Art and Observation tour – taking an hour and a quarter tour around the buildings of the complex and then going to the top of the Rock (where we got to jump the queues because we had done the tour). The tour was excellent. It told you all sorts of things that you would never otherwise know or guess and took us into some buildings that you wouldn’t think you’d be allowed into. Interesting that the sculptures on the building tried to show what tv would be like – but given it hadn’t been launched and the sculptor had no idea about what it would do, the sculptures were not what we would have expected. This particular door had nudes over it and Rockefeller Jr was such a prude that he refused to use that doorway, despite the fact it was closest to his office. His wife was the one who was interested in art and insisted on filling the complex with art. In fact, she was one of the ladies that formed MoMA. The mosaic shown above was supposed to show how radio waves would revolutionise communication to the ‘peasants’ and broaden and enlighten them and preventing the despair of ignorance. It’s a great mosaic.

Today was Easter Sunday and the Easter Parade was on. This isn’t a parade like the Macy’s Thanksgiving one though. New Yorkers parade down Fifth wearing their Sunday best and hats after the easter church services. There were quite a lot of well dressed people about and even some in top hats. And a lot of drag queens in outrageous outfits and hats! This also meant that a lot of areas were closed off – so when we went to look at Atlas out the front of one of the buildings, there were no people in the way and we could walk all round it and take people-less photos. We saw a little of the parade – but I was pleased to be out of it to be honest. The crowds were heaving and it was all a bit too much for me.

Once we back inside 30 Rock, we went up to the Top of the Rock. By now it was a cloudless sky and baking, baking hot. Yesterday was so cold, but today we got sunburnt. The views – especially over Central Park, were amazing. There are 3 levels and the majority of the top-level doesn’t have any glass barriers around it – so was even better than the lower ones. But the Chrysler building remained elusive. It hides behind another one and meant we could hardly see it. You could see Liberty as a tiny spec, but there. It was just incredible. Have I said that enough times yet? The whole place was so amazing it was hard to get your breath. Every turn was another iconic building or piece of art or view that would be the highlight of any trip – never mind the norm on this one!

When we left the building we were very dehydrated and burnt! We had skipped breakfast and coffee (relying just on our sponsor drink) so were really hungry and thirsty. We were trying to find another grill we had seen in the complex called Bill’s (food on this trip only by Bill and Ted then?) but couldn’t work out which block it was on, so we gave up and went back to Ted’s for another excellent salad and Margheritas followed by a HUGE strawberry shortcake dessert. We wanted 2, but the waiter said we wouldn’t want 2 – he was so right (despite us not wanting him to be!) After a large lunch we were just so tired we decided to go for a siesta. We were going to then go out to Staten Island to see the skyline at disk – but fell asleep and didn’t wake up UNTIL dusk. This was probably just as well – it was throwing it down and there was a thunderstorm going on – and we had a front row seat – so we sat and watched that from the pool area on the 8th floor. Fab forked lightning over the skyline, with great fruit salad from the Deli. A relax and regroup day!