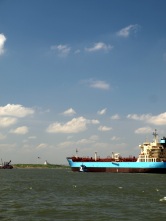 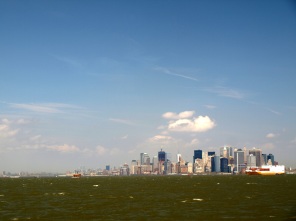 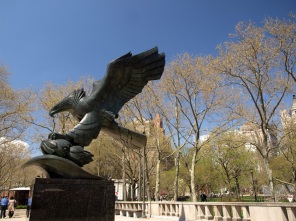 So we got up and leisurely packed (the nasty part of the trip) while we had a nice brekkie from the deli. Finally checked out about 11.15 and had to wait to check out at reception and put our luggage in storage.

So we walked then to 50th to get on the Subway down to South Ferry to get on the ferry to Staten Island. Thought the journey would be horrific on the tube. It was the hottest day we had experienced – but the trains were nicely air-conditioned.

Got to the ferry terminal and had to wait a while for the next ferry. We got onto one of the outer decks and got a spot by the railings – but turns out it was the wrong side for Liberty. Still we did get to see a lot of the Brooklyn and Queens skyline and the Queen Mary 2 in dock (I’ve been on this one and know that it is too big to get into most harbours – which is probably why it is not in the cruise terminal dock near our hotel as the water would not be deep enough for it).

Once we had docked at Staten Island, almost half of the passengers just got off and walked back into the queue to go back – as did we. THIS time we got on the correct side of the ship to see Liberty and Manhattan – and got some lovely pics.

Once we got off the ferry we went for a walk through Battery Park and then walked up to the One World Trade site. Whatever they are building there is well underway and is as high as many of the surrounding buildings already. I didn’t want to take any pictures there as I have quite mixed feelings about it – famous for all the wrong reasons. It’s iconic and historic and something that I feel should be left alone out of respect until the next buildings are complete and open. Then I think it is OK to take pics of a memorial or something… I dunno. Very mixed. Almost didn’t want to look to hard or anything. Those people who have lived with it all for the last decade (and it is almost 10 years ago) it is just normal – but felt really weird and strange for me. It was also SO hot I couldn’t wait to get away and out of the sun. We seemed to walk for miles looking for a subway going in the right direction – but finally got there. Got off on 50th again and went to a Mexican bistro to have lunch (for a change SMALL posh food) with fantastic mango mojito.

Back to the hotel to pick up the bags and get a cab to the Port Terminal to get the airport bus. There was something doing there and we couldn’t get to where we should have picked up the bus – so had to wait somewhere random and run to get it when it finally appeared. We got it OK and checked in OK. Bag wasn’t too heavy either. Sadly, Newark airport has not many shops – unlike Heathrow – at least not BIG ones, so was a bit boring. Shelly and I played Ultimate Alphabet on my iPad to kill some time. Once we got on the plane we were held at the gate for an hour – waiting for late connecting passengers and because a man on the flight was ill. We took off with a load of storms going on to our left – but we were OK for the first hour, then we hit a bunch of turbulence that went on for well over an hour – it wasn’t bad, just annoying as couldn’t sleep. We didn’t get any sleep and in the end I was up for 32 hours!

Can’t believe the trip has been and gone – I was looking forward to it for so long. It didn’t disappoint though – it was just brilliant. Can’t wait till I get to go back there.