They show up whereas usually they exist but are hidden, invisible, almost existing in another plane.

What has intrigued me most, is that though they often appear to be on flat planes – but with the frost you can see, very clearly, that they can be very dimensional – particularly in crevices etc. I would love to make a room (even scaled) with threads of web in it. Taking a line for a walk in 3 dimensions. Colourful, different textures, even with light. Knitted threads, silk threads etc. Or that needs to be lit to see it. Perhaps it should be in invisible thread lit but differing coloured LEDs.

They remind me somewhat of the scaffolding sculptures I just posted below. That you get to make your own art/sketch according to your viewpoint of the piece. I suspect ‘elf and savety would stop me from having a room people could walk through – but it would be good to make it on a big scale with the spider silk made from knitted icord. I think walking around it or it rotating with lights (perhaps intermittently) showing the web would be very exciting.

I also really like the spider’s web by the drainpipe that you can barely see – but the shadow is so strong. You can only see the web when it passes over the shadow. Photo isn’t great – but it shows the point. 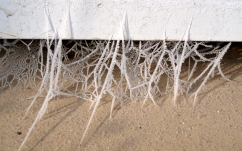