Over the Easter period, I did a fair bit of painting. Most of these (in fact all) will remain as test pieces for one reason or another.

For a start, I primed the boards with gesso – but used a standard household paintbrush. This was a massive mistake. It left deep brush strokes on the surface of the mdf which were impossible to remove – despite lots of sanding – and were visible through the striped surface. As most of my work needs a very flat surface, this was very disappointing – both in terms of outcome and me not thinking about it clearly before putting in the effort. All is not lost however… although they may be for these pieces!

I have subsequently bought a mouse sander which can even out the surface very evenly and quickly – in comparison by hand (which was debilitating). I have also tried applying the gesso with a gloss paint roller – which goes on very well and evenly – with only a slight textured surface, which should sand down well. The original test pieces which I had yet to paint were sanded down – as best as I could get the brush marks out – and had gesso reapplied by roller. Although these are not perfect, I think they are now usable, where I would have been reticent to use them otherwise.

The lines were hard to control with the ruler on the ‘ready to hang’ panels too – plus the gesso had made ‘lips’ around the edges meaning it was impossible to get the ruler flush to the surface. The lines subsequently bled or were curved. I think this could be resolved by going back to a flat panel – where the lines could be applied cleanly – and applying the stabilising spacer after the painting was completed, plus the sanding now eliminates the lip. This would allow panels which didn’t work to be discarded before going to the effort of adding the frame. Dad and I have had to devise a new way to fix the panel to the support, but with the use of templated frames and angled wedges we think we should be able to fix the struts without damaging the painted surface.

Three panels to paint together were complex and led to a few ‘errors’ where I got lost in the order of the colours and applied the wrong one. However, wiping incorrect colours off led to some interesting effects – one of which is shown below. I photographed the panels in natural light and again with the kitchen spotlights turned on. Again, the colours are much punchier under spotlight confirming my initial ideas that the works need to be strongly spotlit.

I allowed these to dry and stored them face to face to protect the surfaces. However, these ‘stuck’ together still and when separated have pulled away some of the painted stripes/deposited paint. Whilst this seems disheartening, it is actually a good thing – as they were not good enough for the exhibition and allow me to experiment with them. This may mean overpainting the stripes and scratching or removing the upper surface – which may be interesting – which I would have been reluctant to try out on exhibition-grade work.

I moved on to laying on the base stripes for a test ‘plaid’ panel. This panel is large (possibly too large – or at least the max size I would like to use) and again I had issues with the paint and crisp lines. This time the stabilising frame worked really well, but the board that hangs over this is prone to bending when pressure is applied to the ruler – and again the lines appear curved or bleed. Again, these would need to be painted without being fixed on the frames. I also had an issue with the hardboard having a ‘surface’ on it already. I lightly sanded the surface (primer or melamine? I’m unsure – it didn’t specify) to provide a key, but the paint was still liable to scratch off easily when the surface was touched. I have two more of these panels remaining, one with gesso applied and one without. I will try both with the stripes and possibly move onto ‘plaid’ pending the outcome of the first test (where the upper stripes are yet to be applied) – but regardless, I rather like these large ‘1 day’ striped panels (60cm sq). The scale for these stripes is pleasing and I may do some more depending on the outcome. I have cut some standard hardboard into smaller squares (40cm) which can be primed with the gesso and used in the standard way – the paint should adhere better to this.

I find the transparent paints annoying when trying to layer the paint on top of each other. Particular colours (brown and burgundy/red) in particular are translucent and need to have several layers applied to become opaque – leaving brush marks often. To overcome this I may have to begin at the other end of the spectrum with black (I usually start at white and get darker). 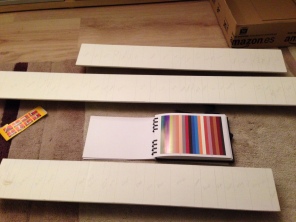 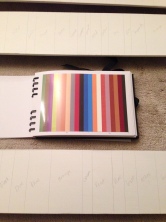 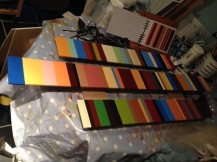 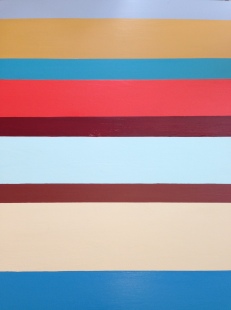 A website I was previously unaware of was tweeted by Pantone. It is called Chromapost and is a Social Network to record your day with just one colour – find out about it here.

The concept of Chromapost is very similar to my own – although I use more colours daily. As a piece of social media, it is easier to see how the moods of areas, countries etc change and, I guess, if that can be linked to anything in particular. You can see a public timeline of colours produced by the users here. There is also a gallery section where artworks produced by the users can be seen. These are very akin to my work – although I am using a slightly different format (long and thin) and the medium of paint. My preparatory work is created electronically and look like those shown. I am waiting to see if I am accepted onto the site.